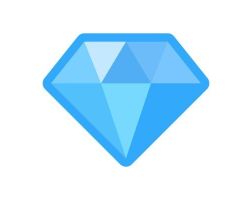 TON is a protocol proposed and developed by Dr. Nikolai Durov. We, the Free TON Developers are grateful for Nikolai’s contribution to the TON protocol and wish him to continue developing it as part of a wider community effort.

Since we believe in freedom of speech, in information sharing, and in free software, we have decided to give the power back to the community and unanimously proclaim the launch of the Free TON blockchain and the Free TON Crystal (or TON for short) as its native token.
The Free TON Crystal symbol will be (U+1F48E): 💎

Peculiarities of the Free TON network

The main project document is not the usual Whitepaper but the Declaration of Decentralisation (DOD). It states that Free TON sees its mission in maintaining the values of the free market, personal data protection, decentralised management, resistance to censorship and cooperation of people around the world.

Free TON is a peering platform of multiple blockchains. Unlike other ones, TON-based blockchains have incomparably higher transaction speed and have initially been conceived as scalable. The Free TON economy is based on the TON Crystal coin, considerably different from classic cryptocurrencies in its architecture as well as in its distribution method: it was initially impossible to simply buy TON Crystal because the tokens were distributed through a competitive mechanism.

According to the idea of the project community, 5 billion tokens were distributed on a non-financial basis among the project participants who had made the greatest contributions to its development. Once the distribution of tokens is complete, the tokens are free to move – this is the stage that unfolds before our eyes today.

The Free TON network is fully decentralised, in conformity with the Declaration. The decentralisation is a fundamental feature of network management, validation and software development. TON Crystal is distributed among as many network users as possible and all of them will be able to participate in the coin staking. The project is being worked on by several independent development teams. No validator can possess more than one-third of all the available network tokens.

TON is essentially an intermediary interface between the blockchain network and the users who are given a set of tools to develop TON OS applications, including Solidity and C++ compilers, databases and SDK. The user interface is represented by the TON Surf OS, which is partly similar to the Linux interface and includes secure browser, wallet and chat applications. Since the TON code is open, community members can actively participate in refining and improving its components.

Would like to know the latest TON Crystal price? Here is it as well as other useful data about this kind of cryptocurrency. At NEIRONIX, we collect and provide any valuable content on it such as 1 TON to USD so that you could make a favorable investment and have a positive result. We invite you to the world of TON Crystal value, by giving a real comprehension of its prospect and worthiness!

All Data You May Need about TON Crystal Perspectives and Cost

Due to NEIRONIX, you will be aware of all the latest news. Firstly, everybody can get acquainted with TON Crystal price today – these data are renewed with a high speed as we appreciate your wish to have up-to-date information at hand. Secondly, you are able to look through the following important aspects: market cap shows the collective value of all sold coins, low/high value demonstrates the minimal and maximal value of 1 coin among other stock exchanges, and volume is the total value of transactions on stock in a day. Thus, you won’t have a question: ‘How much is a TON Crystal worth?’ All data are thoroughly analyzed and presented for your convenience!

If you keen on TON Crystal price chart, we offer it – just choose the period you need (from 1 day to maximum) and get a full analysis of its falls and growth during the appropriate period. To add to it, NEIRONIX disposes of topical news about TON Crystal current rate and its possible changes, current TON Crystal value with future forecasts and growth perspectives. Thanks to us, you will be notified about the latest tendencies in the chosen cryptocurrency market!