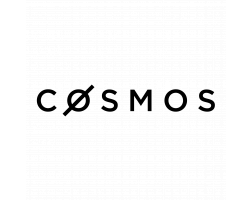 Cosmos
ATOM
Cosmos (ATOM) is a new project designed to solve the old problem and make transactions between different blockchain networks possible. The project is a global ecosystem to unite all blockchains among themselves into one common “Internet blockchain”.
Umlaufende Versorgung:
190 688 439 ATOM
Gesamtangebot:
237 928 231 ATOM
Quellcode-Link Explorer-Link Explorer-Link 1 Explorer-Link 2
Coin
Mineable
5
Sadly, you’ve exceeded the limit of adding to favorite.
The limit possible is 5
Increase the limit
Gehen Sie zur Webseite
0
0
0
0

Cosmos (ATOM) today is with a 24-hour trading volume of . ATOM price is -3.26795% down in the last 24 hours. Lowest cost ATOM is recorded on the crypto exchange KRAKEN. Leader in trading volume ATOM is the exchange OKEX. Cryptocurrency market capitalization is
Über Cosmos (ATOM)

Cosmos (ATOM) is a new project designed to solve the old problem and make transactions between different blockchain networks possible. The project is a global ecosystem to unite all blockchains among themselves into one common “Internet blockchain”. Cosmos operates on the Tendermint protocol. It is envisaged that blockchains will have a different structure, different settings, but the main requirement is the support of smart contracts.

Cosmos platform is built as a network of autonomous blockchains “zones” and the main blockchain “hub”. Zones are built on the Tendermint protocol. The ATOM token inside this ecosystem can be sent from one blockchain to another.

In the future, developers plan to enable transactions between blockchains within the Cosmos atom platform and blockchains such as Ethereum or Neo, which are based on smart contracts. It is also planned to add the possibility of interaction with Bitcoin, but so far there is no solution to this problem.

Launch of the project

In 2014, Tendermint inc began work on a PoS protocol hybrid algorithm. Two years later, the platform made it possible to unite on its core the blockchains developed in different programming languages. In 2017, an ICO was launched. In 30 minutes, the ATOM token was sold for almost $ 17 million. Next year, about 20 test networks were launched using the Tendermint protocol.

One of the important points for the ATOM token and the Cosmos platform was the simultaneous start of trading on 4 large exchanges, which greatly increased the value of the coin and the popularity of the project.

You cannot mine a coin, you can store it on several types of wallets and trade on popular exchanges, including Binance, Huobi, Kraken, Poloniex. Although the first and main coin for the project is the ATOM token, Foton is used to pay commissions for transactions in networks.

Cosmos should solve the problem of exchanging between cryptocurrency networks. After all, cryptocurrency exchanges simply exchange one token for another, without solving the problem of interaction. Since there are so many exchanges, from decentralized to state-controlled, with their own problems, weaknesses, and vulnerabilities. Instead of an exchange, Cosmos offers direct integration between different blockchains and data interchange.

In addition, for developers of blockchain projects, Tendermint Inc created a special development environment “Cosmos SDK”. The idea of ​​the platform is for people to be able to create their blockchain networks on a modular structure without serious programming skills.

The clear advantage of the project is the strong idea that many cryptocurrency market leaders support. Ready-made examples with the implementation of technology. As an analog of the exchange, Cosmos offers a truly real exchange between blockchains. Disadvantages:

- network control of 100 validators (holders of the largest number of Atom tokens);

- competition in the form of Polkadot, AION, Penta;

- success is highly dependent on the popularity of the platform among application developers.

Read more about the Cosmos project and the ATOM token on Neironix.io