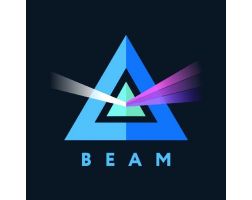 Beam
BEAM
The Beam cryptocurrency is the first coin based on the MimbleWimble protocol. The aim of the project is to create the most scalable blockchain with high-quality transaction anonymity. The BEAM token is a good example of how the idea of ​​improving an existing product evolves into something new and unique.
循環供給:
36 974 240 BEAM
総供給:
36 974 240 BEAM
最大供給:
262 800 000 BEAM
ソースコードリンク エクスプローラリンク
Coin
5
Sadly, you’ve exceeded the limit of adding to favorite.
The limit possible is 5
Increase the limit
ウェブサイトに行く
0
0
0
0

Beam (BEAM) today is with a 24-hour trading volume of . BEAM price is -5.57816% down in the last 24 hours. Lowest cost BEAM is recorded on the crypto exchange GATE IO. Leader in trading volume BEAM is the exchange Binance. Cryptocurrency market capitalization is
Beam (BEAM)について

The Beam cryptocurrency is the first coin based on the MimbleWimble protocol. The aim of the project is to create the most scalable blockchain with high-quality transaction anonymity. The BEAM token is a good example of how the idea of ​​improving an existing product evolves into something new and unique.

BEAM is not the first coin with high confidentiality, but its difference from similar projects is the scalability of the blockchain, which can significantly reduce its “size.” Developers reckon that reaching the level of bitcoin, the beam blockchain will be 70% lighter.

The BEAM coin received such an advantage thanks to the MimbleWimble protocol, on which its implemented as a native network token.

Beam features directly related to confidentiality and simplification of the blockchain code. For example, transactions can be conducted offline or online. Transactions will be anonymous to other network members and to outside observers. The coin supports various mining equipment, which ensures good decentralization. The beam functionality allows users to use it for various tasks, not only for quick anonymous transfer of funds.

BEAM coin uses the Equihash encryption algorithm, which is also used in Zcash. Like its “brother” Grim, the Beam’s blockchain does not contain concepts such as wallet address, transaction hash, etc.

The network does not store recipient and sender data. Anonymity is provided by the Dandelion system. The blockchain code could be reduced by removing all intermediate data after each transaction. But, if you want to provide third parties with details about the transfer of assets within the beam network, you can use the Auditability tool created by the developers.

The price of the token changed in proportion to the interest in it: sales began at 60 cents, but after active discussion in the media, the price rose to almost $ 3. In just a few months, the cost of the BEAM coin returned to initial value.

You can trade a coin on Korean Huobi, Gate.io and several smaller exchanges like Bitforex. So far, the BEAM token has not visited any of the TOP exchanges. For holders and miners, developers have created several wallets, including desktop, mobile and CLI Wallet with command-line controls

Definitely, beam cryptocurrency is a step forward for the evolution of the blockchain and increases the anonymity of cryptocurrency transactions. Beam features such as blockchain scalability, anonymity, limited emissions, and the Auditability feature are undeniable advantages. But there are a number of problems, such as low network speed and wallet vulnerability.

You can watch the further development of BEAM, price, capitalization, and upgrades on the Neironix.io