Ethereum this month has shown a staggering 43.48% growth, +30.18% last week alone. It's all about DeFi, because the upcoming update of the mainnet Eth implies a transition to the PoS (Proof-of-Stake) consensus mechanism. Will the growth of ETH continue and what this transition means for miners? Let’s review in this article. 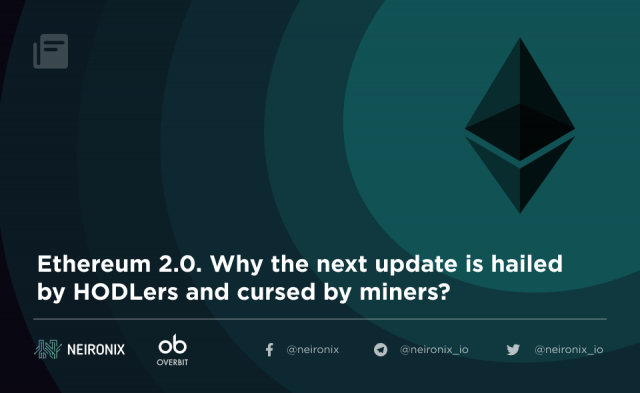 Since the launch, Ethereum has been updated several times, first with Homestead in March 2016, then several Metropolis updates: Byzantium in October 2014 and Constantinople in February 2019 and the last Istanbul in December 2019.

After Homestead, the Metropolis update was implemented, which includes two phases Byzantium and Constantinople. At the end of the first phase, the following were added: status fields in transactions, including lines 1 - success and 0 - failure. Implementation of the Difficulty Bomb, although the Difficulty Bomb was originally included in the network in 2015, it has never been used since then. The Difficulty Bomb will make it difficult to mine Ethereum to a minimum, i.e. will become a kind of motivator for the transition to the POS mechanism. While the Difficulty Bomb is not activated, but with the successful launch of Eth2, and the beginning of the transition to POS, in order not to divide the network into two PoW and PoS camps, most likely the developers will activate it, although not soon. Note to Ethereum miners.

In the Constantinople hard fork, added instructions for moving bits Bitwise, with which bits of binary data can move left and right, reducing the cost of shifts in smart contracts by 10 times; verification of smart contracts with a pool of hashes from another smart contract; reduction of miners' reward from 3 ETH per block to 2 ETH per block; delay of the Difficulty Bomb activation for another 1 year.

The Serenity update implies a transition from PoW (Proof-of-Work) to PoS (Proof-of-Stake). The POW mechanism, in which the miner receives a reward in the form of coins for solving complex mathematical equations, is used by most blockchains such as Bitcoin, Ethereum, Litecoin, Bitcoin Cash, Bitcoin SV, Monero, etc. To solve such mathematical problems, the miner needs special equipment, competition it is large in this area, therefore, one device for mining will not earn much, and installing several devices is energy-intensive, besides, the governments of some countries are already preparing bills to legalize mining, in which farms will be obliged to pay taxes, some governments even want to ban mining altogether, By the way, mining is an illegal activity in 4 countries: Algeria, Bangladesh, Nepal, Bolivia.

The consensus problem with the POW mechanism is not only power consumption, but also scalability and availability. Each block has its own size - a certain amount of data that a block can store, while the process of mining each block is sequential. In other words, if the data about the transaction did not fall into the mined block, then it is necessary to wait for the completion of the mining of the next one to process the transaction in the network. The problem of accessibility concerns, again, the mining process, due to the high competition and high cost of equipment and energy consumption, mining is a profitable, but very expensive activity.

The transition to POS replaces the two fundamental components of the POW miner and electricity with a validator and a share. In order to become a validator, one needs to deposit at least 32 ETH into the official deposit contract created by the Ethereum Foundation, download the Ethereum 2.0 client software. The validator will need to confirm blocks in the Ethereum 2.0 network, for the correct confirmation of the block, the validator receives a percentage of the contributed share in the deposit contract. It should be noted that the validator must be online and carry out block confirmations as often and as long as possible, otherwise the reward will decrease, and for an attempt to deliberately hack the network or unauthorized access to data, the entire share will be penalized.

All of the above sounds tempting, getting a percentage of 32 Ethereum, which is $ 10,100, is quite a strong argument in order to participate. In the excitement of the launch of Ethereum 2.0, the price of Ethereum rose only over the past week, gaining more than 30% in price and most likely the growth will continue if the launch is not canceled again. 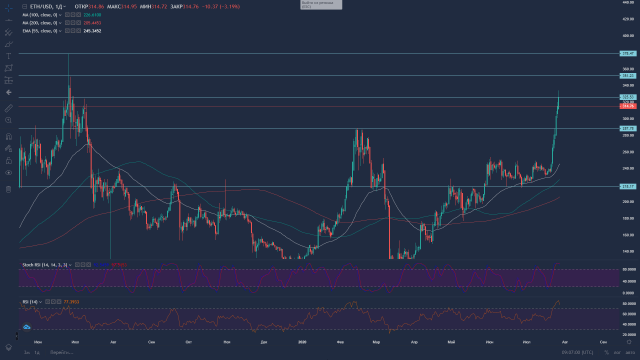 One of the options is margin trading, trading cryptocurrencies with leverage to increase profits, for which you can later buy Ethereum and contribute to the Ethereum Fund, but keep in mind that trading with leverage, like trading, in principle, implies a huge risk of losing everyone funds, therefore, before risking funds, you should study trading strategies, the basics of technical analysis, etc., then try all your knowledge and skills in demo trading, we advise you on the Overbit platform. You can open a demo account on Overbit and you will be automatically credited with 8 BTC and 50,000 USDT for trading. It is important to note that on other platforms the quotes and spreads are different on demo and real accounts, but not on Overbit.

However, if you are not a trader and do not want to risk your funds in trading, then many companies appear on the network that create stake pools, you can add a certain number of coins to the pool and receive a reward for the contributed share, the company will take from a certain percentage of the pool member. It is necessary to be very careful here, and it is better to deposit funds into the steak pools of trusted crypto-exchanges.

The transition to Ethereum 2.0 will not be as quick as you might have thought while reading this article, but will include 4 phases.

Phase 0 - 2020 Beacon Chain launch on the Ethereum network. In this phase, validators will be registered and PoS will be launched. To launch the initial block of Beacon Chain, the number of deposits in the network must be more than 524 218ETH, the total number of validators must exceed 16 384. It should be noted that until the above figures are reached, no share reward will be made.

Phase 1 - Launch date has not been set yet, but Phase 1 is expected to launch 1 year after Phase 0. Implementation of shard chains. In the Ethereum 2.0 network, the blockchain will be split into 64 fragmented chains that will work synchronously and interact with each other. Thus, the processing of blocks will be divided into fragmented chains and the waiting time for confirmation will decrease several times.

Phase 2 - So far there is no exact description of what will happen in this phase, but judging by the roadmap drawn up by the founder of Ethereum, Vitalik Buterin and the Ethereum developers, in this phase, fragmented chains will be transferred from a simple data container to a structured chain state, the resumption of smart - contracts. Each chunk will run an eWASP-based virtual machine, open accounts on Eth2, execute transactions, transfer funds, withdraw funds from wallets, and execute smart contracts. 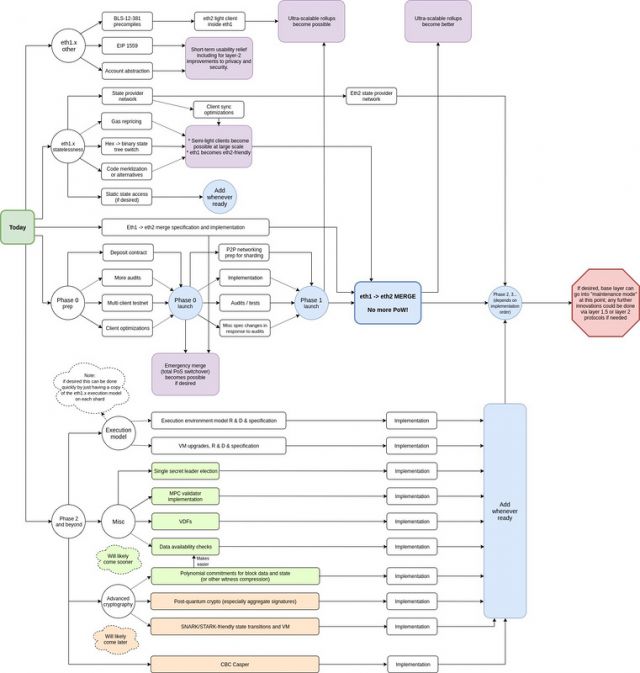 Following the lead of Ethereum and Cardano

Recently, we talked about Cardano's transition to the Shelley, in which the ADA network will work under the PoS system and free from centralization, it is possible that other blockchains, besides Bitcoin, will also move to PoS. At the moment, the roadmaps are Litecoin, Ethereum Classic, Monero do not show that these networks are willing to transitioning to PoS but things might definitely change in the time. In 2020 Dash blockchain network is expected to update Dash Core and switch to PoS.

Summing up, we can safely say that the transition to PoS has a positive effect on the operation of the network, reducing the processing time of transactions and the power consumption of the network. The latter has a very favorable effect on the ecological state of the planet, because natural resources are used for the consumption of electricity, and in some cases, such as when generating electricity from coal and oil stations, the ecosystem of the planet is harmed.

Long and short LTC, BTC/USD, ETH/USD, BCH/USD, XRP/USD and other currencies with up to 100X leverage on Overbit.