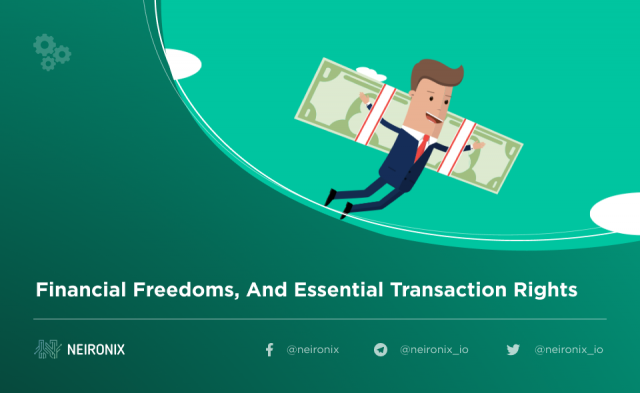 Deny this right and nearly all other freedoms fall.

What then are people to do in the face of tyrannical oppression and a move for financial institutions to flex their power in cutting business and humans off from finances.

Use PriFi solutions and find a safe haven.

It seems perplexing at first. Until you dive in, as @punk6529 so eloquently did in his outstanding Twitter thread about the subject. Let’s look at why this freedom is at the base of all others, with aspects 6529’s thread paraphrased and included here:

Please take a look at all of the essential human rights. You’ll notice that they nearly all stem from one core foundational principle…the freedom to transact.

Freedom of speech might require a number of things to actually occur:

All of these “cost money”.

Freedom of assembly might require a number of things to actually occur as well:

Again, all of these “cost money”.

Even freedom of religion requires a number of things to happen to actually occur:

Again, all of these “cost money”.

We can go on and on with examples from the fundamentals of human rights. But that would be to belabor the point.

The exercise of nearly all of your rights costs money. The freedom to transact is at the root of them all.

Which is why, in this current socio-economic crisis, taking back your financial privacy is the only way to find a safe haven.

A Brief History of Financial Censorship

Historically the risk for financial censorship has been much lower.

For all of human history, until about the early 2000’s it has been, without a doubt, a given fact that humans could transact with ‘decentralized non custodial means of exchange’. Said another way, humans have always had the means to transact with something of value that the government, corporations, or powers that be, could not monitor or control.

For tens of thousands of years this was in the form of shells, items of value such as skins, or weapons. This evolved to precious metals like gold and silver. And of late, over the last few hundred years, it has been cash.

Yes, printed by the government, but still untraceable or uncontrollable in terms of restricting transactions.

Throughout history, all of these things have been “decentralized”, “non-custodial”, and not “KYCed”.

But, with the advent of the interwebs, and the new addition of blockchain technology things have drastically shifted - and not for the better.

What Changed? The Last 20-Years

The institutional environment has shifted in its position, adopting a stance that non-custodial (meaning money they do not have the ability to track or control) - is by default a suspicious threat.

There are central banks around the world who push for the “death of cash”, driving forward central bank digital currencies (CBDCs) that allow unfettered access to transaction data.

There are various terrorism rules and acts, such as the Patriot Act, or versions of, that classify non-custodial transactions as suspicious terrorist activites that must be stopped.

And while we all want to stop terrorism, or look to prevent money laundering for the greater good of society, it should be understood that there are both short term and long term implications of such broad sweeping enforcements on cash.

One being the geopolitical (or localized) pressure of the government pushing private corporations to cut off access to fully legitimate causes or businesses.

Businesses that are in fact, perfectly legal and have crossed no legal boundary.

While you may or may not disagree with the businesses stated above, the point is there are no legal grounds that say these businesses are illegal. And yet we move forward in an undemocratic way - using payment processors like henchmen, pressured by central governments.

The net result of this is a form of “deep bureaucracy” where the areas of gray leave neither the government nor the financial institutions with responsibility.

Regulatory bodies claim “we didn’t specifically say to cut off or freeze accounts” (except perhaps, in the latest egregious behavior illustrated by the Canadian government), and the payment processors say “well, we really had no choice, we were getting pressured from the regulatory bodies…it’s out of our hands.”

Businesses and individuals end up with no bank account, frozen funds, and no way to sustain their lives - for in the modern world, paying bills, transacting globally, paying vendors and contractors, all require traditional payment methods.

The net effect is an erosion of trust in the system, a blurring of truth, and your ability to maintain financial sovereignty, the root of many fundamental rights, all but held in the hands of a few. A few who could eliminate it at any point in time.

Unfortunately the future of this does not look bright, as many central banks and government bodies have stated their desire and plans to move towards CBDCs. Their goals?

Let’s remember, that a system that holds every transaction ever (blockchain), and that taps directly into your bank account, would be the most efficient and powerful financial system ever. Nothing has come close to this level of control. There is no further step of power beyond this.

Regulatory bodies could literally fund, or remove funds, from your wallet. They could directly apply negative interest rates to your account (say -10% per month) if you don’t spend a certain amount of money.

Want to remove your money? That could be blocked as well. Stopping you from sending any transaction to certain wallets, or extracting money into cash - if cash is even still an option

The powers of financial control would be near limitless.

And we have all been building the technology to enable this control. We’ve been slowly turning up the fire, as we ‘the frog’ boil inside our own creation.

The solution is not, contrary to popular belief, as simple as Bitcoin or cryptocurrency.

Yes, those do help, and it is a step in the right direction. But we must remember that cryptocurrency wallets can and have been frozen. Furthermore, in order to transact and be functional in any capacity in society, you need to be able to use the traditional financial institution payment rails.

The solution, while not perfect yet, is getting there. The solution is decentralized private finance (PriFi) that can truly only be achieved by a small handful of decentralized blockchain protocols like Haven Protocol.

Furthermore this can be done with stablecoin, denominated in USD, EUR, or even GBP to name a few.

And there are others. Other protocols which provide a level of PriFi security that can protect your financial transactions.

We are at a tipping point and the scales are not weighted in our favor.

For the first time in history regulatory bodies and corporations are starting to amass the power to control your ability to financial transact. It is happening now, in what used to be considered leading democratic countries.

In the future, unless we take action and start to engage with PriFi, things will inevitably be worse.

The question is, will you let it get that way?

Once Harlequin discovered crypto in 2014, the question 'what is money' took hold and Harlequin became fascinated by the possibilities of decentralizing trust. Working in the tech industry, it was clear to Harlequin that we all have very little privacy in the digital world. Harlequin wanted to change this. Upon discovering Haven, these two passions collided and the concept of a private stablecoin ecosystem immediately made sense. If you’re interested in joining the conversation and learning more about PriFi stablecoins, you can learn more by going here: https://havenprotocol.org/