Cryptocurrency Litecoin is one of the eldest coins, which stably takes place in the TOP-10 coins rating. If Bitcoin is called digital gold, then LTC is called cryptocurrency silver. This coin has attracted increased media attention due to the recent halving. Well, several weeks have already passed after this event, and now that the hype has calmed down a bit, let's take a clear-headed look at the current situation and analyze this project in detail. 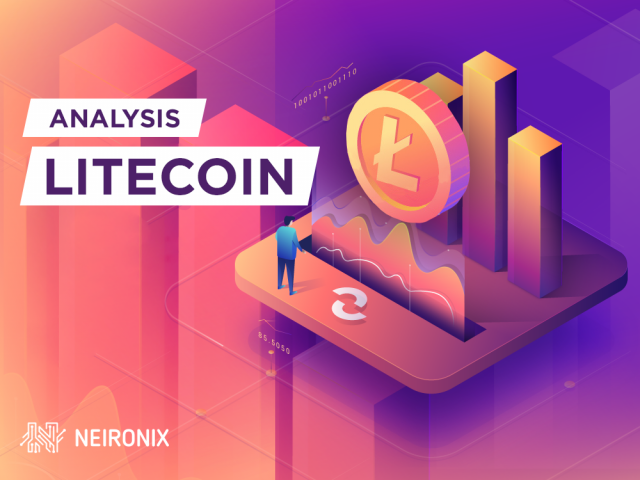 So, the long-awaited Litecoin halving took place on August 5, 2019, let's analyze what happened to the price of the coin after that. 15 percent pump happened directly on the day of the halving, but then a gradual depreciation followed. At the time of this writing, the price of the coin is slightly above the main support level, which previously acted as a resistance line - about $74.

Probably many people are asking the question: “So where is the long-awaited significant LTC growth in connection with this event?”. Just look at the chart, there you will see incredible + 507% (from $24 to $142) at the peak this year, after which there was a fall. But even considering the correction of the coin, it shows an increase of about 300% since the beginning of the year.

Such a rollback was expected for experienced market participants because the coin showed a similar picture in the previous halving. It took place on August 26, 2015, and before this event, LTC also showed insane growth: from $1 to almost $8 per coin, after which it fell to $3, but did not fall below this mark anymore.

And now, looking at the price movement over the past five months, you can see that LTC has not grown much in percentage terms as last time. But still, at the beginning of the year, it has risen in price from $24 to more than $140 at its peak, at the end of June. As in the previous halving, the price of LTC began to fall in the last month before the event.

Note that the previous LTC halving took place almost at the very bottom of the bear market, which happened after the rapid bull run of 2013. On August 26, 2015, on the day when the reward for miners on the Litecoin network decreased, Bitcoin almost reached its minimum of $200. The market mood was very sad then, so there was such a strong decline in those days.

Note that in 2015, the next day (08/27/2015) after reducing the reward for the found block, the complexity of the network began to grow. But unfortunately, this time we can see a completely different picture - after the halving, the hashrate in the Litecoin network decreased by 30%, which tells us about the decrease of the miners' interest in the coin.

Reducing the complexity of the Litecoin network caused another consequence - a drop in the number of transactions. Well, now let`s look at numbers:

Besides, after halving in the Litecoin network, the number of active addresses has decreased. On August 5, there were 72.795K, now this number has dropped to 51.935K. But if you look at the chart of the change in this value, you can see that on August 10 their number sharply reached 262.573K, and then it returned to the previous value at the same speed.

It is still unknown, what exactly caused such a sharp rise in the number of wallets. The coin price on this day initially dropped from $86 to $84, after that it rose to $87, and we do not see a significant increase in trading volume on this day.

If you look at all the above indicators (hashrate, number of transactions and active wallets) in the Bitcoin network, you will notice that they are either at the same level or are growing.

In the current situation, we most likely will not see another strong decline, it will probably take some time for the coin to consolidate because this time we are not at the very bottom of the bear market and, in general, the mood of investors is much better than it was four years ago. Although, it is worth noting that the bearish scenario may become relevant for LTC if something does not change in its development strategy as a project.

What to expect from Bitcoin halving in 2020?

How to use historical data to understand what will happen during the halving of the original Bitcoin? We know that this event in the main cryptocurrency network will happen in less than a year, to be more precise, in May 2020. It has become a very popular topic lately, and many people are wondering how this will affect the market.

Well, historically, a pump is typical for this event, which begins about a few months before the X-day, then a correction occurs immediately before the event itself, and sometimes it continues some time after it. This is exactly what happened to BTC last time in 2016. 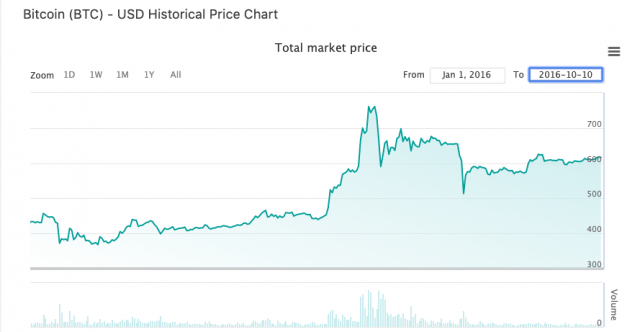 This model is becoming so widespread that probably we will see a similar picture next year, especially considering the fact that the market is generally bullish.

IMPORTANT! Do not regard this as a guide to action, since no one in the world can know the future for sure, we only compare the data array that we have to predict a specific event. Therefore, treat your investment with a cold mind.

The current situation with the development of the Litecoin project

As for Litecoin, most likely, that this coin is waiting for the bear market in the near future. Why? - Because during a halving in 2015, this cryptocurrency was a completely different project, under the leadership with Charlie Lee, and the development of alternative digital silver was in full swing.

The process of development and construction of the LTC network continued until the end of 2018, but throughout 2019, the development of the project literally stopped. From January 2019 to today, they have only 10 commits in the Litecoin core on GitHub.

A commit is saving the state of a project to a repository, similar to saving it in a computer game. This is a very convenient tool, as programmers have the opportunity to return to any of the network saves, if necessary.

Just look at the history of general commits to understand that Bitcoin is steadily growing in this regard. As for the Litecoin cryptocurrency, it showed an increase in the number of saves in the repository in the period from 2016 to 2018, then there was a sharp decline. If you carry a more detailed analysis, you will notice that many altcoins show a similar problem.

Now let's look at the number of developers in the Litecoin team: previously, there were 42 programmers who participated in the creation of the code. As of the time of this writing, only one person remained on the team. 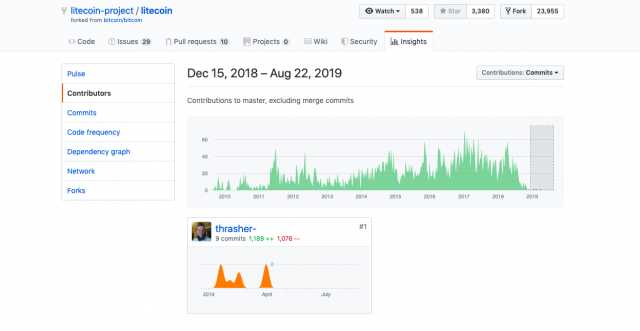 Possible reasons for the decrease of Litecoin`s popularity among developers

What happened? Some people may argue that the development of Litecoin is more complete and there is nothing to improve there. Note that this statement does not withstand absolutely any criticism, and to make sure of this, you just need to look at the Bitcoin repository - the number of commits is the same as in 2016, and there are no fewer developers. For example, from January 2019 to the present, there was created 100 times more commits than Litecoin has.

If to compare the developers of these two coins attentively, you can see that many of them worked on both projects. This was an absolutely common occurrence throughout the history of the Litecoin, until the beginning of 2019, but then everything changed. What caused this?

We know that the creator and ideological inspiration of this project, Charlie Lee sold all his LTCs at the peak at the end of 2017. Many people still blame him for insider trading, as he was the director of design at the Coinbase cryptocurrency exchange during the LTC listing on this site.

Recall that at that time there were quite provocative tweets of Charlie Lee and Brian Armstrong (CEO Coinbase), in which they discussed the listing of LTC. The public regarded it as a good example of insider trading, which they did not even try to hide. Brian responded to Charlie’s tweet about listing with the words “I`m in. Let's do it”, however today you won’t find this message because it was deleted, but users managed to screen it. 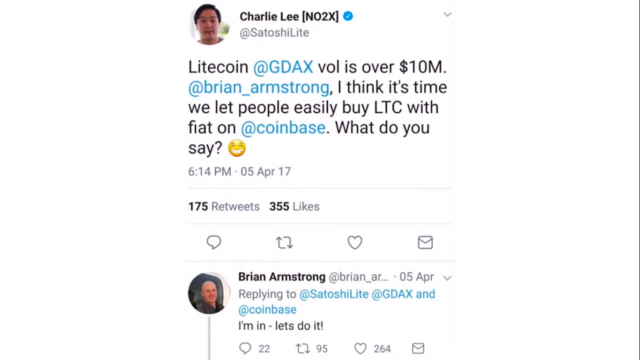 Right after that, Charlie Lee quit his job at Coinbase and sold all his LTCs. Then he decided to distance himself from the project, explaining that he simply did not want to cause a conflict of interest and that he would like to focus more on the general acceptance of the currency, and not on the price of Litecoin. The development of the project should be carried out by the Litecoin Foundation, but based on the actions of this resource, we can conclude that it was more engaged in marketing than the real development of technology.

Of course, it benefited the general brand recognition, but none of the high-profile news speaks of promoting technology, the development of which is very important for making adequate competition in the market. Most interestingly, representatives of the Litecoin Foundation confirmed this by writing on their blog that over the past few months the bulk of their efforts has been focused on global awareness.

The financial part of the Litecoin project

To make developers work on a project, the creators need to worry about the fact that programmers receive monetary compensation for their work, otherwise, they simply stop working. Obviously, this is exactly what happened with Litecoin - experts simply refused this project.

In the above article on the official website of the Litecoin Foundation, representatives stated that they created an LTC wallet that will be used exclusively to support network developers. They published the address of this wallet and asked users to donate funds there on a voluntary basis.

Here is the wallet number:

Let's check how much money they gave for the technical development of the coin.

So 47.33 LTC, this is a little over $3500 at the current rate, which is just a ridiculous amount for a project of this scale. This is the reason why no one wants to develop Litecoin and this can become a huge problem in the future unless there is an investor who wants to spend a large sum for the development of the coin because it still has great potential.

We sent a formal request to the Litecoin Foundation to find out the reason for this. Here is a link to our tweet to Charlie Lee, let's try to reach out to him together.

Advantages and disadvantages of the Litecoin project 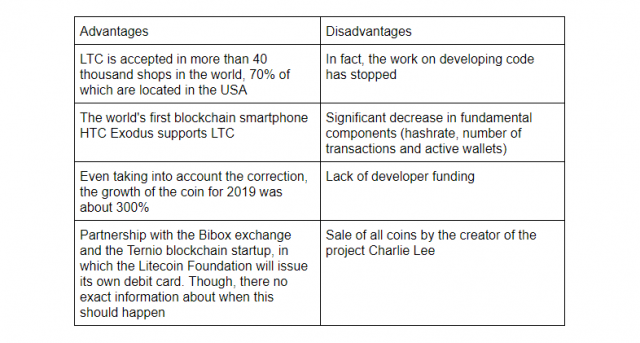 Instead of a conclusion

As we can see, now Litecoin is a rather controversial project. On the one hand, the Litecoin Foundation enters into partnerships with a big number of large organizations, but on the other hand, if to dig deeper, you can see that the technical development of the project has practically stopped. Litecoin has every prospect of becoming the so-called, popular cryptocurrency, which will be used for everyday purchases. But to make it true, the project needs financing, which it lacks so much.