G7: Global Stable Coins Are Undesirable Even After All Risks Are Eliminated

The Big Seven International Club (G7), which includes 7 countries with the most developed economies, according to IMF criteria, stated in its report that global stable currencies pose a threat to the world economy. The report lists 9 risks associated with “global stable coins” that can be “scaled quickly”. 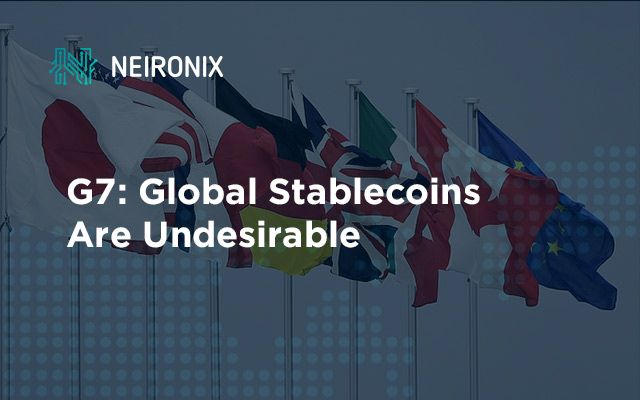 According to the BBC report, the G7 task force that wrote the report includes representatives from a number of central banks of the G7 member countries, as well as representatives from the International Monetary Fund (IMF) and the Financial Stability Board (FSB, the group that oversees and sets the rules for the G20 economies ) This week, a report will be presented to finance ministers of G7 member countries at IMF meetings.

The G7 believes that no stablecoin project should begin operation until the legal, regulatory and oversight challenges and risks are adequately addressed. […] Addressing such risks is not necessarily a guarantee of regulatory approval for a stablecoin arrangement.

The task force expressed concern that Libra, Facebook's global stablecoin, could potentially stifle competition from other stable coin providers. In addition, global financial stability may suffer if there is a sudden “loss of confidence” on the part of global stablecoin users.

In a letter addressed to “G20 finance ministers and central bank governors,” FSB chairman Randall Quarls said “stablecoin projects of potentially global reach and magnitude must meet the highest regulatory standards and be subject to prudential supervision and oversight. Possible regulatory gaps should be assessed and addressed as a matter of priority.”

Facebook announced the Libra project in June and still hopes to launch it by mid-2020. However, the project faced a powerful regulatory response around the world, since the number of Facebook`s users is so large that the stablecoin emitted by it may well contribute to the destabilization of the global financial system.