How Blockchain is Transforming the Digital Gaming World

Gaming is an industry that is constantly growing. Every year, newer innovations come around that consistently revolutionize how people can enjoy playing the games they love. What’s even better is that gaming is inherently tied to the growth of other related industries, such as hardware, sports, and casinos. One technology that is likewise making a splash in the gaming world is blockchain. 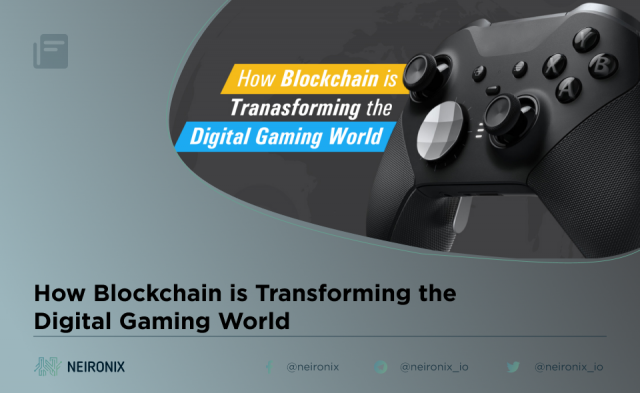 Blockchain is a technology that is normally associated with cryptocurrency, and it’s affecting many businesses around the world, digital gaming included. The increase in the utilization of blockchain technology is changing the way players can enjoy the gaming experience and introduces a host of capabilities that might have been once unthought of.

Before we dive into how blockchain affects the world of gaming though, it’s essential that we have some sort of understanding of it first.

Data enters the blockchain through these blocks, and once the block is filled with data, it is then chained into the blockchain chronologically. This chain of data is what is termed the “blockchain.”

This means that when a blockchain is utilized and is decentralized, the timeline of data becomes irreversible. Basically, once a block is filled and becomes part of the blockchain, it is there permanently and people can see the exact time of when it became part of the chain.

Because of its features, blockchain offers greater security against hackers. Once a block has been added to the blockchain, it is almost impossible for someone to singlehandedly alter its contents. For example, if someone were to alter the contents of one block, it can simply be crosschecked by other people who have a copy of the blockchain, and the outlier will be deemed to be fraudulent and unaccepted.

With blockchain technology, users all over the world, as long as they have an internet connection, can transact with others 24/7/365 almost instantly. In fact, anyone can participate in the network without having to identify themselves, making for smooth, hassle-free, and secure transactions.

We’ve seen how blockchain technology is being utilized by cryptocurrency, but this can also be taken advantage of by the gaming industry. There are multiple ways in which blockchain can enhance the gaming experience of people all over the world with all sorts of preferences.

Currency for Your Favorite Games

Most video games nowadays increase their income stream by selling attractive collectibles to players. These collectibles, such as character and weapon skins, moves, and other peripherals help players stand out from the rest.

Games such as Call of Duty: Warzone and Valorant sell these skins to enhance the aesthetic experience of players. On the other hand, games like NBA 2K sell animations such as dunk and layup packages to make the virtual players look more impressive on the virtual court.

While these games can also sometimes reward these to players who grind for experience points, some add-ons are only available for purchase. To avoid cumbersome processes of having to provide personal information and transact for each individual purchase, most games now implement a virtual currency system. This allows players to have a virtual wallet which they can top-up through various options, including cryptocurrency.

These assets that may be purchased or earned are often a source of pride for gamers. They wear it as a mark of the time they spent excelling at the game or simply to set themselves apart from other players. However, a fear back then was that when your game or console malfunctions or crashes, all your in-game assets are lost.

People who like to game but also like to make a profit out of a hobby often turn to online casinos. However, furnishing your bankroll in online casinos back then generally required you to give personal details, and transactions could take days.

Now, with blockchain technology, online gamblers can use cryptocurrency to supply their bankrolls. This enables players to have near-instant deposits and withdrawals without having to give personal information that they would rather keep private.

Blockchain technology not only makes it easier for gamers to make in-game transactions but also for transactions outside the game.

Gamers can purchase games, consoles, and other hardware using cryptocurrency. Regardless of what a gamer wants to purchase, blockchain technology gives you the option to make prompt and seamless transactions, while at the same time giving you a sense of security from malicious hackers and failures outside of your control.