How Many Cryptocurrencies Are There? What Are They Worth?

Since its inception in 2009, Bitcoin forever revolutionized the monetary system. In a nutshell, a cryptocurrency is a form of payment, an online transaction system, if you will. The one distinct feature of this currency is that it utilizes a top-notch security system – one that far exceeds the security of conventional payment methods. 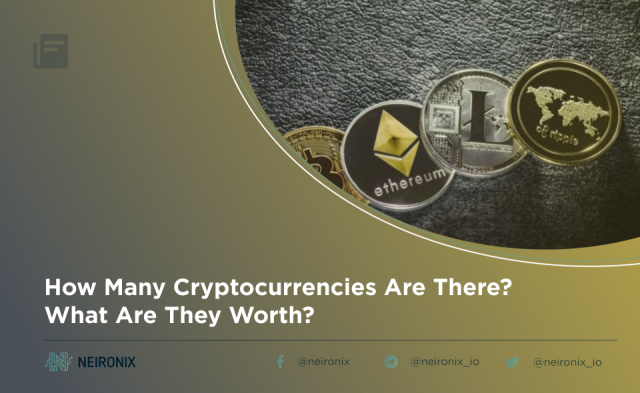 The prefix “crypto” stands for cryptography and what this entails is that any payment done via cryptocurrencies has little chance of being compromised by hackers. Most cryptocurrencies use a technology called blockchain. In its simplest form, blockchain is a decentralized database technology that is being spread across a network of computers through which transactions are being recorded and managed.

The idea is that we no longer need banks to oversee our transactions. Instead, you can anonymously pay for your goods and services with the total assurance that your identity is kept intact. Starting out with just the one cryptocurrency Bitcoin, there are now over 6000 in existence with a total value of well over $200 billion. Scroll through to learn more about the most popular cryptocurrencies at the moment and their current worth in the market.

As we all know, Bitcoin is at the forefront of the competition. The concept of Bitcoin—conceptualized by an author under the pseudonym Satoshi Nakamoto—was written in detail in an authoritative report called the white paper.

The currency was initially unpopular and its primary use was to trade goods on the dark web – namely the silk road. Nowadays, you can pay for a plethora of activities using Bitcoin, from the comfort of your couch, anonymously! Activities that were considered to fall under a grey area such as online gambling are now all the more popular and you can safely play Bitcoin slots without any fear you might be doing something dubious.

By the end of 2017, Bitcoin’s value skyrocketed and hit the $20,000 mark. Currently, many countries have adopted the currency and its use has permeated every corner of society. As of this moment—and after many months of fluctuating—the price of Bitcoin is standing strong at a whopping $19,500.

Another popular cryptocurrency among users is Ethereum. Developed in 2015, Ethereum introduced smart contract technology through which automatic transactions can be executed.

Aside from tracking ownership of digital currency transactions, one of the more interesting features of Ethereum is that developers can build and run their own applications on the Ethereum blockchain by way of using the aforementioned automatic transaction system.

Therefore, in a sense, Ethereum is more of a platform for building apps than a digital currency. At any rate, the use of Ethereum is gaining more traction by the day and after a fallback in 2019, its value has risen steadily and is now just over $590.

Known as the banker’s coin, Ripple was released in 2012. It can be seen as both a digital payment network and a cryptocurrency. In short, Ripple is a blockchain that is designed to be primarily used by banks to allow them to make faster payments at a lower cost.

Aside from banks, Ripple is highly regarded by well-respected corporations and governments. You can exchange a slew of currencies using Ripple without the concern of not being able to connect it to your bank. The current value of one Ripple coin is $0.49.

Launched in 2011, Litecoin is one of the popular cryptocurrencies that was created off the back of Bitcoin’s blockchain. Like other cryptocurrencies, it is a global open-source payment network that is highly secured and is totally decentralized.

Its features are very similar to that of Bitcoin’s. One key difference is that Litecoin was the first cryptocurrency that made use of a technology called the Lightning Network which is a payment protocol that allows for the processing of many transactions per second.

The coin limit for Litecoin is 84 million, while Bitcoin’s is 21 million. It is also believed that transactions made with Litecoin are faster than ones made with Bitcoin. This year, Litecoin’s value has been rising fairly steadily and is now at a value of just over $82.

It is a privilege that we can now make person-to-person transactions without the fear of being stripped of our privacy. Whether you’re interested in trading cryptocurrencies or are merely fascinated by their nature, the four currencies explained here can act as a foundation to your understanding of the other ones and the ones to come.

Being in the know about all the cryptocurrencies available could prove to be an impossibility. However, what you ought to do is that you can focus on a few of them, and now that you have some light shed on your questions regarding the crypto world, you’re one step closer to making faster and more secure transactions.