Is Tether Actually Backed by US Dollars?

Ever since a mysterious person named Satoshi Nakamoto gave the world a gift called Bitcoin, cryptocurrencies have been struggling with volatility. Nothing has changed in the last couple of years, as the price of a single unit of Bitcoin jumps up and down on a daily basis. 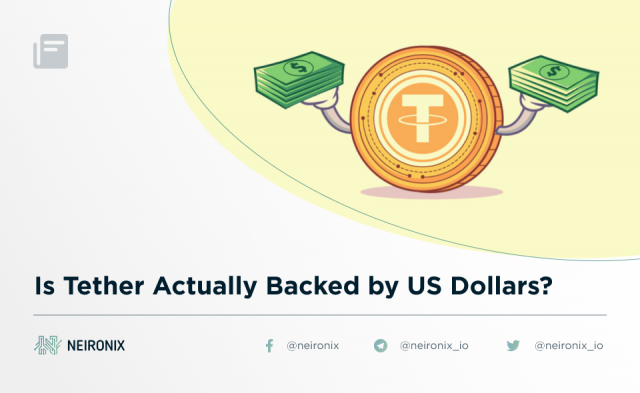 It is not certain whether Bitcoin and other cryptos will ever achieve the stability of fiat money. That’s why professionals from the crypto sphere had to act quickly and create a cryptocurrency that’s actually backed by something else. Tether (USDT) is a product of one such effort.

Stablecoins are cryptocurrencies, just like Bitcoin or Ethereum, but there’s one small difference between them. Stablecoins are not as volatile as traditional cryptocurrencies, simply because they are backed by another asset. A stablecoin can be “pegged” not only to a fiat currency but also to another crypto or even to exchange-traded commodities.

Is Tether a Stablecoin?

Yes, USDT is definitely one example of a stablecoin. Its value is pegged to the US dollar and the cryptocurrency certainly doesn’t experience frequent price fluctuations such as BTC and other cryptos. However, it did experience price fluctuations in the past, and this can also happen in the future. How so?

USDT Is Not Equal to USD

At one point, the company behind Tether admitted that the exact peg to the American dollar is not possible. After a lot of controversies related to Tether, the information on the site changed gradually to explain how this peg actually takes place. This was noticed and described in an article on Forbes.

The original text on the site explained that the currency is backed 100% by a “traditional currency” that was held in reserve by the company behind Tether. Later, the text was changed to explain that the traditional currency wasn’t the only thing that backed USDT. There were also “cash equivalents” and “other assets and receivables” created by Tether’s loans to “third parties.” It is also mentioned that these “third parties” can sometimes include entities that were affiliated with Tether.

The article didn’t really explain why the price of Tether changed. When you take a look at Neironix, you’ll notice that the price of Tether went up and down from time to time. Although it remained at $1 for most of the time, it fluctuated from $0.96 to $1.06.

Despite everything, USDT is still doing pretty well in the world of cryptocurrencies. It’s currently the fourth most popular crypto, right behind Bitcoin, Ethereum, and Ripple. The market cap is somewhere around $8.8 billion right now, and people’s interest in Tether only seems to be growing.

It’s difficult to predict where things will go from this point when it comes to USDT and its price. It could turn out to be the scam of the century, but it could also be one of the greatest innovations that revolutionized the crypto world.