Math Analysis in the Service of Trading: How to Predict the Cryptocurrencies Prices with the Help of Signal Bot

Every year, trading becomes more and more popular among the most diverse segments of society. Earlier, only advanced professionals worked on the stock markets and few exchanges, but now, the number of exchanges has grown tens or hundreds of times as well as those who wish to earn money on assets rate changing. 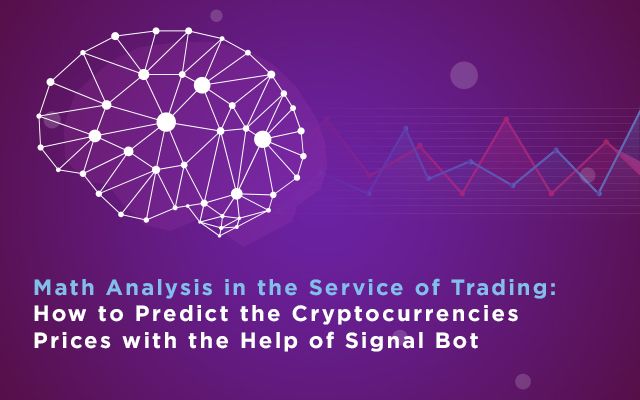 But the market hasn`t changed much: it is still harsh and even severe to newcomers who want to “raise” quick money without awareness, while experienced traders constantly earn on the same market.

At first glance, the market, especially cryptocurrency volatile one, seems to be unpredictable and chaotic. Therefore, since the first exchanges appeared in a relatively modern form, people have been looking for an approach to understand market changes using different types of analysis. Thus several sciences to predict market behavior appeared:

Software tools and functions for forecasting the market using mathematical analysis of charts and their progress, as well as many other algorithms and services appeared over time. At the moment the result of the technical analysis development is robots that predict price changes based on mathematical formulas and market data.

The scientific base for existing mathematical models of human behavior patterns

Earlier, numerous social experiments showed that people act almost the same in similar situations. They make decisions according to their personal principles, perception, social assessments and stereotypes. Scientists’ focused their research on identifying patterns and stereotypes that have a direct impact on our behavior in all social aspects of life.

Having studied the behavior of different groups of people at work, in educational institutions and in other areas implying close communication, scientists from various institutes of psychology, neurology and cognitive sciences from the USA and China built universal models, with which it became possible not only to explain but also predict human behavior. Due to hard work and careful analysis of the data obtained in the experiments, it was possible to detect clear patterns of behavior - a structure that would explain the causes and reactions of people to many phenomena and processes. The next step was to form the obtained results into mathematical models.

Having studied in detail the results of the tremendous work done by scientists, and applying successful analysis methods existing in trading to them, the Frofins UO development team managed to create a truly successful product. They took intelligent algorithms as a basis and applied the time series forecasting theory  (statistics on the significance of data over decades). The solution thus obtained searches for stable patterns among the data set and, having analyzed them, builds the most probable forecast.

Today we want to talk about a new and very interesting development that we present to the global Neironix community — we are talking about a solution aimed to correctly predict the price of cryptocurrencies. In simple words, a bot that sends signals about price changes. The bot was developed based on proven mathematical models and existing trading tools. Its working principle is backed by the results of an extensive study of scientists from leading countries of the world.

What is the main difference between our signal bot and most of the similar solutions currently on the market? The fact is that the Neironix bot predicts not just price changes or chart movements, but the traders' earlier behavior in similar situations, which directly affects the rate. Indeed, the asset rate can change from a post on Twitter or regulators’ decision or a meeting of the country's parliament. No system is able to predict such situations. But the behavior of people, their decisions and the reasons for such decisions usually remain the same throughout history, thus clear patterns are formed.

Modern methods for forecasting exchange indicators are mainly based on intelligent algorithms, such as neural networks and random forest. Along with them, the traditional methods of forecasting time series are still used: regression analysis, fractal methods, as well as forecasts based on deterministic chaos.

We have already mentioned, the developers of Frofins UO used the approach where intelligent algorithms were combined with large-scale developments provided by the theory of time series forecasting back many decades. The developers proposed a new design called “dependency learning” meant to build forecasts.

In general, the dependency learning is part of a more general approach called “dependency mining”. Without going into detail of the algorithm, the approach of the Frofins developers can be described as selecting stable patterns from the data, followed by making a decision regarding the forecast based on the obtained information about the observed patterns. The more patterns are recognized, the more information is available to intelligent algorithms for making a decision.

The phenomenon of the so-called rejection of the forecast is a side effect in the operation of the algorithm. This approach was used intentionally - a rejection comes into play in cases where stable statistical patterns for some reason cannot be obtained and interpreted by the bot. In such cases, the bot simply does not issue a forecast at some time intervals not to mislead users of forecasts. In the case of most practical problems, this approach is quite suitable. For example, when trading on the exchange by signals, the algorithm does not create an entry point for the strategy, and in the worst case, the client skips the moment of making a profit but certainly does not bear any costs connected with an erroneous forecast.

As a result, the forecasting technique used in the development of the signal bot was able to track trends in the data with high accuracy. Each forecast can be provided with confidence in it (a value from 0 to 1), if necessary. Trend refers to an increase or decrease in the predicted indicator relative to its value at the beginning of the time interval.

For stock indicators, the bot uses trend forecasts for the day and for the hour, and it fixes the accuracy of the forecast made not according to the data at the end of the time interval, but according to the maximum (or minimum) of the value reached by the indicator within the time interval. This approach seems to be reasonable in terms of exchange trading since the strategy does not take profit at the end of the time interval, but when the price reaches a predetermined value. In order to take into account such features of trading on the stock exchange, the bot uses the adapted method to assess the accuracy of trend forecasts made, described above.

The main purpose of the Signal Bot

The algorithms underlying the signal bot were originally created to help traders' technical analysis of market behavior. As mentioned above, in some cases when the bot cannot find enough patterns, the system refuses the forecast not to give users dubious information.

There is one significant detail worth attention: a bot with signals is not a ready-made trading strategy. It does not indicate entry points or the value by which the price will change. A signal bot is an excellent tool for highly accurate forecasting of trends in market behavior.

At the moment, the tool gives forecasts for every hour, and the accuracy is at least 70%. This does not mean that for every 10 forecasts there will be a minimum of 7 correct ones, statistics should be considered over longer time periods.

Despite all the simplicity and obvious benefits of technology, you still need to have a certain amount of knowledge to use it properly. The bot will not open applications, set limits and replenish a deposit on the exchange, but it will perfectly complement your strategy or serve as the basis for creating a new one. Frofins and Neironix are confident that their common project can help traders achieve serious results in the cryptocurrency market.

To get started with the Signal Bot, join the NEIRONIX SIGNALS Telegram channel. We want to warn the users that the public Telegram channel is presented only for informational purposes as a demonstration of modern technologies of mathematical modeling and forecasting changes in the cryptocurrency value.