An Anonymous Bitcoin Wallet: Does It Exist and How to Make One?

Bitcoin is an interesting concept as the blockchain infrastructure provides both a dose of anonymity and transparency. Since everyone can access the ledger of Bitcoin transactions, confirmation and authentication are easy, but the addresses behind the transactions remain somewhat hidden in the system. 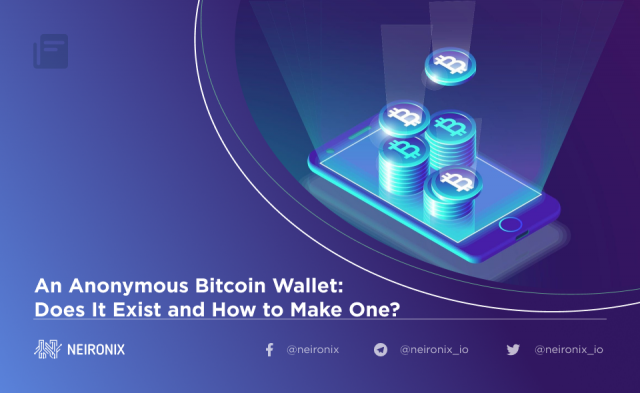 However, not all wallets and transactions surrounding Bitcoin are as secure, and a completely anonymous Bitcoin wallet is impossible to make. That said, anonymity is something all Bitcoin users strive for, so there are ways to enhance it greatly.

The Concept of an Anonymous Bitcoin Wallet

What Is Stopping Anonymity?

Governments don’t appreciate the idea of a decentralized anonymous currency exchange system. When a currency is exchanged and held by untraceable individuals, it becomes much more challenging to spot offenses, counterfeiting, or illegal marketplaces. The Silk Road is an excellent example of the latter.

When you open a Bitcoin wallet, you need to register an account that can trade in cryptocurrency. This account will store some of your personal information. If you use it to buy Bitcoin, the bill also has a currency trail from your bank account, which links the two together.

Even though Bitcoin transactions are anonymous, the public keys used can be found by anyone. The public key can then trace the Bitcoin back to your wallet account and your private details. Authorities can request this information for inquiries, so your ‘anonymous Bitcoin wallet’ is only confidential to other traders.

Is There a true Anonymous Bitcoin Wallet?

Knowing all of this, it’s nearly impossible to make a completely anonymous wallet since there will always be some sort of currency trail. Even the most secure wallets only have slightly more robust encryption methods, which can eventually be broken.

There are only a few ways to ensure anonymity while using Bitcoin, and they all start with reducing your exposure to the network and using wallet providers that don’t ask for confidential data.

You can make an anonymous Bitcoin wallet by following some stringent requirements:

The piece of paper you wrote the keys on has become an anonymous Bitcoin wallet. The address (public key) will be recognised on the blockchain, but your data has avoided the internet.

What to Do With an Anonymous Bitcoin Wallet?

To remain anonymous, you must also avoid public exchanges. There are a few ways to buy Bitcoin and turn your stored paper wallet Bitcoin into fiat currency.

The first method involves face-to-face transactions. This can be tricky, as it involves operating locally, and requires an established trust between the parties. While it doesn’t provide total anonymity (as you usually have to know the other person), it keeps you safe from other interested parties.

The other way is to use a Bitcoin ATM. You input the address in the ATM, and it will dispense currency for you to take home. Withdrawing cash this way has its limits, though. Not all places have Bitcoin ATMs and you’re usually limited to the local fiat currency. Additionally, Bitcoin ATMs have worse rates – buying Bitcoin from an ATM can be 20% more expensive. Some might even request identification, removing the anonymity from the very start, although they have become rarer. ATMs also won’t deal in large amounts of cash at once, to adhere to anti-laundering regulations, but nothing stops you from making smaller transactions.

Benefits of Lack of Anonymity

Of course, there are benefits to not having perfect anonymity in the Bitcoin trade. If the government can track transactions, they are more likely to approve widespread use of Bitcoin and soften some regulations in turn. Both software and hardware wallets already have some of the best security measures to protect you from other users. If governments can go after illegal activity easier, they are less likely to bother you if you’re using legitimate transactions and methods.

While a truly anonymous Bitcoin wallet is possible, it might not be worth the hassle if you want to trade Bitcoin actively and enjoy worldwide trading and limitless transactions.

Author Bio: Hitesh is a digital marketing strategist and entrepreneur with more than 15 years of experience in digital marketing, start-ups, branding, and customer acquisition strategies. Hitesh is the CEO and Founder of Reposition Group, which specialises in digital growth strategies for companies in the cryptocurrency market such as Bitamp.com.