Reasons Why Monero Is Still A Great Investment For The Future

Cryptocurrencies have entirely changed the market - especially BitCoin, the most widely known and used cryptocurrency. More and more businesses decide to add it as a payment method, which means that online transactions are even more secure than before. 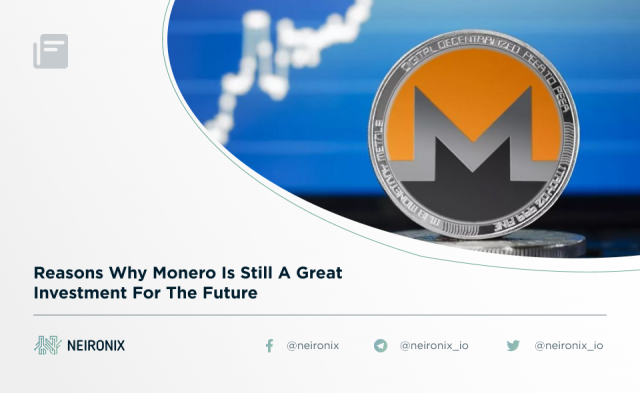 Every once in a while, a new cryptocurrency is introduced to the public. This raises a question - in which cryptocurrency should I invest? Well, at the moment, one of the best ones is Monero. Why exactly? Well, that’s something we will discuss in this article.

So, let’s take a closer look at why exactly Monero remains a great investment for the future, shall we?

For the last year or so, Monero has been showing a rising tendency. According to several sources dealing with Monero price prediction, the cryptocurrency is said to be worth $211.146, which means it will experience an increase of nearly 41%. What does it exactly mean for you as an investor?

Well, if you decide to invest $100 right now, today, in a year’s time, your investment might be worth more or less $141.

2. Monero is a Secure and Untraceable Cryptocurrency

At the moment, there are around 5.000 cryptocurrencies. However, not all of them will survive - especially since many of them don’t bring any real added value to their users. It is said that 99% of cryptocurrencies will go to zero in the future, and to be honest, it’s hard to disagree with that - especially after looking at the charts.

Truth be told, people need a private, secure, and untraceable cryptocurrency, and only those who are able to provide it will survive. That’s exactly what Monero is.

3. Monero is an Easy Cryptocurrency to Mine

Similarly to Bitcoin, Monero’s consensus algorithm is also based on Proof-of-Work. However, their mining algorithm is completely different.

When it comes to Bitcoin, mining requires dedicated equipment such as the ASICs. Also, the investment to mine BitCoin is more expensive, which means that an individual with only a personal computer will be unable to mine Bitcoin.

On the other hand, when it comes to mining Monero, the algorithm was designed in a way that doesn’t give ASICs much advantage over personal computers. By doing this, the creators hope to encourage new users to join the network.

4.  Monero Was Designed to Medium of Exchange

When Bitcoin was designed, it was meant to become two things - a medium of exchange and a store of value. However, as time went by, its position became more established as a store of value.

Bitcoin has many limitations - for instance, its number is limited to 21 million, and according to the latest news, around 4 million have been lost permanently. It is said that by 2140, there will no longer be any rewards for miners validating a block of transactions. Also, the already high prices of transaction fees might increase even more if their volume will not reach a sufficient threshold.

Knowing the kind of limitations Bitcoin has, Monero took a different approach. The creators implemented an automatic block size adaptive mechanism, which means that the Monero Blockchain automatically adapts to the volume of transactions that need to be processed. This means that they can process many transactions per second while still keeping the fees low.

This is probably the biggest reason why Monero is a great medium of exchange, which is something a cryptocurrency aims to do - not only being a store of value.

5.  Monero Has a Large Development Team Working On It

Ever since Monero was launched back in 2014, more than 350 people have made contributions to it. In 2019, almost 200 developers were actively working on it, making it one of the largest developer teams in the industry.

You might be wondering - what does a development team have to do with Monero being a good investment? Well, quite a lot.

Having a large team of developers working on a project like this ensures that the cryptocurrency will continue to evolve at a sustainable pace. This is especially important in the technological field, as everything is evolving quickly.

There are so many cryptocurrencies on the market today that choosing the one as the best investment for the future can be quite hard. However, at the moment, one of the best ones is Monero, and there are several reasons why - some of which we listed above.

While we think that one of the best things you can do if you want to get involved with cryptocurrencies is to invest in Monero, the final decision is up to you. Good luck!