Weekly Results: Market Decrease Due to Proceedings Between SEC and Telegram

Neironix Analytics Department researched the cryptocurrency market and summed up the results of the past week. 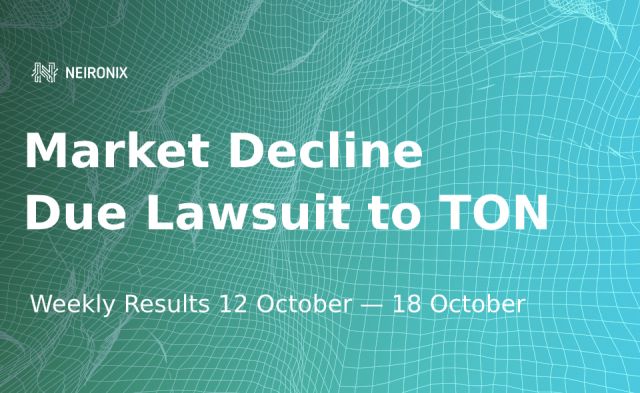 How was the week for Bitcoin?

Over the past week (12—18 October), the bitcoin price fell by 5,01%, completely offsetting the growth of the previous week. Moreover, the falls were systematic and strong enough: one or two hourly candles pierced support levels. As a result, capitalization has decreased by $10 billion and reached a level of $145 billion. The trading volume has declined gradually, without strong leaps, and finally, it has lost almost 25% of $18 billion. Nowadays the trading volume is $14 billion. The dominance of Bitcoin has continued to decline for the fourth consecutive week. This time, it fell from 66,8% to 66,1%, and it is approaching the critical zone of 64%—65%, thus, an outflow from bitcoin to altcoins may begin.

It should be mentioned that bitcoin still fell into lateral movement, the exit from which can`t be found currently. Furthermore, there weren't opportunities for active trading, because the volatility was extremely low, so its value was about $200, which is 2,5%, within 6 days. At the same time, fall was the predominant movement, so trading with long positions was inappropriate, which is most likely due to the lack of strong news on bitcoin.

Since October 11, Bitcoin chart has begun to unfold and formed a downward channel currently. Now the price is moving along its upper border. Notice, several attempts have been made to break it at $ 8,130. As it is fixed on Fibonacci retracement, the aforementioned level falls at the one of the strongest level — 0.23 by Fibo. Now the situation with Bitcoin is generally calm, which indicates a strong phase of consolidation that began after the fall, happened a month ago. 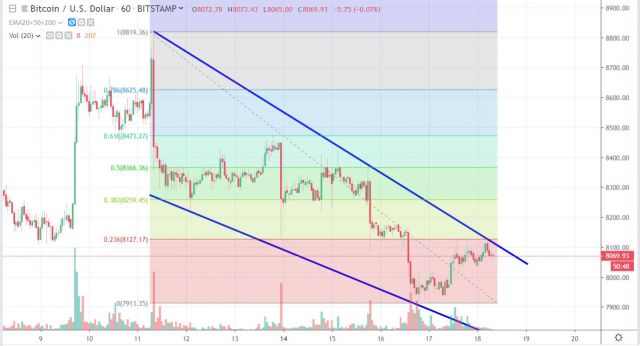 There is no preponderance in either side, according to indicators. Most likely, the price will continue to rise.

Bitcoin's price is still under the 200-day moving average (EMA200), and it has been fixed under it. Moreover, it seemed that EMA20 was starting to unfold on exits from under EMA200 at the end of last week, however, this assumption was false. In addition, the 50-day moving average (EMA50) tends to cross EMA200, which can lead to a fall of bitcoin`s rate. If the current trend will continue, then it will happen within 1-2 weeks.

The Relative Strength Index (RSI) also has decreased, but it's still close to neutral. As you remember, it had a minimum annual value at the end of September. However, this index has increased over several weeks, and now it is in the correction phase, as can be seen on the graph.

The Accumulation / Distribution (A / D) index hit a historic high at the end of last week, but could not stay above it and then fell back. Nowadays the situation is similar to RSI index.

Thus, the combination of the above-mentioned factors increases the likelihood of a further fall. 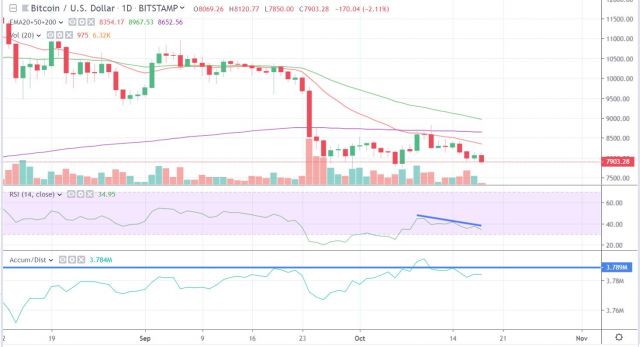 The news, important for cryptoindustry, came from SEC and Telegram.

The US Securities Commission filed a lawsuit against Telegram at the beginning of this week. The main complaints were, firstly, the sale of Gram coins, worth more than $400 million, to American investors and, secondly, the fact that Telegram did not register its coins as securities, which means that the company violated the Securities Act of 1933.

In its turn, Telegram claimed that they accepted money only from qualified investors in private rounds, and the coin is not a security. SEC cited the following fact in support of the allegations: investors gave their money in hope to profit from the growth of Telegram, so it is an ordinary company, and it should be regulated as any other one.

Due to disagreements with SEC, Telegram postponed the launch of platform for 5 months, during which the team promises to resolve all disputes.In addition, Telegram offered investors to withdraw 77% of their money. But those, who wishes to do it, must notify the company till October 23.

Also, it became known that at G7 and G20 summit, states outlined their position, regarding global stablecoins and, in particular, Libra. Thus, the release of global stablecoins was categorically undesirable. And according to the majority, the launch of Libra can have such a powerful effect that it destabilizes the entire global economy.

How was the week for coins from Top-10?

The week was ambiguous for the coins from Top-10: some of them grew, but others fell in price. Nevertheless, the average rate change is negative and amounts -2.06%. Notice, earlier this value was positive.

The growth leaders were XRP and Binance Coin, which have increased by 7,11% and 4,67%, respectively. We should add that the growth of XRP is associated with several partnerships. Also, the company invested in Bitso for development in Latin America.

A large amount of news from Binance stimulated the growth of their coins. As it became known at the beginning of the week, the launch of ETP tool, based on Binance Coin, was happened on the 10th largest world exchange in Switzerland. What is more, Binance conducted another buyback and burning of BNB coins, which became the second largest in the history of the exchange. Meanwhile, the growth of the token was also provoked by the announcement of the next IEO, made by Kava project, whose hardcap is $3 million. In addition, Binance Futures trading volume reached $700 million this week, thus, it was included to Top-10. 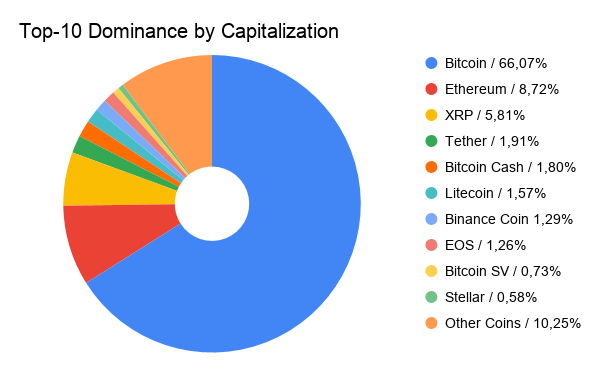 Also, Binance Coin and EOS switched their places in the rating. It should be mentioned that coins, which are not included in Top-10, have increased the share of dominance for the 4th consecutive week. This time, their value was grown from 10.08% to 10.25%.

How was the week for coins from Top-100?

Thus, 70 cryptocurrencies from Top-100 showed a negative trend and fell relative to last week. The average rate of price change was -3.5%. As you remember, this value was + 8% the previous week.

Bitcoin`s fall provoked a fall in altcoins; as a result, a quarter of them immediately lost more than 10% of the price against dollar. Once again it demonstrated the strong influence of Bitcoin on the whole market.

Most of altcoins have decreased in price, and the dominance of bitcoin has decreased, too. As you remember, it was at the level of 71% just four weeks ago, and now it is only 66%. It indicates a decrease in activity of bitcoin and its increase of altcoins. Bitcoin is in flat now, thus, many altcoins can show the good growth. 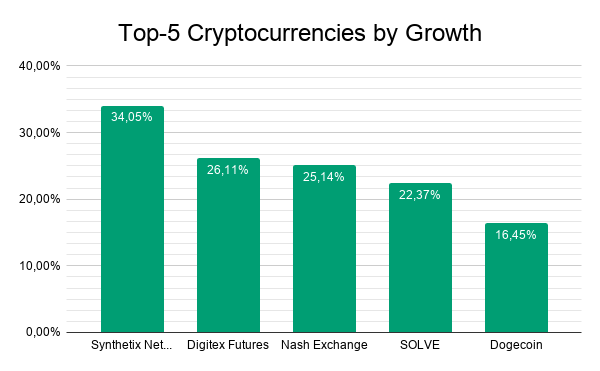 There were no coins, which grew by more than 200%, this week, so it is also associated with a strong fall of bitcoin.The average growth rate among leaders is 24.5%. And it is a lot.

The growth rating was led by Synthetix Network Token, which has increased by 34% over the week, most of which were added in the last two days. The reason for the growth was the partnership with the competition of smart contracts developers.

The second place was taken by Digitex Futures exchange token, which has increased by more than a quarter of its price. The token growth stimulators were a new exchange update. and, probably, an interview with CEO Digitex Futures, Adam Todd, for the prominent issue Finance Magnates.

All leaders have a capitalization, which is not exceeding $100 million, except of Dogecoin, which has the capitalization amounted $330 million, and the trading volume — $68 million. 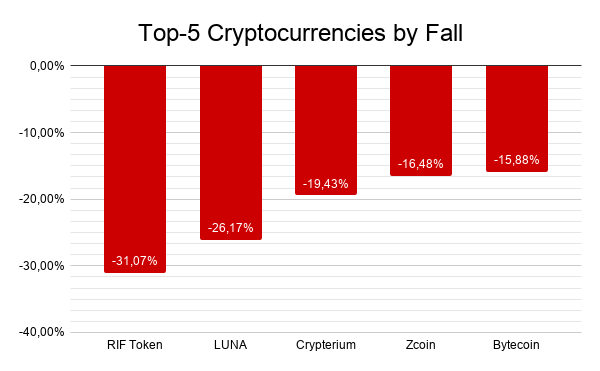 The leader of the fall was RIF Token, which has lost about 31%. The project entered into a partnership agreement with RSK Smart, which creates smart contracts on various platforms, in late September. The purpose was to purchase the largest Spanish-language social network with 30 million users. Thus, it led to the massive demand of this token. Nowadays there is a correction of RIF Token.

Terra Money project, which owns the LUNA, entered into a partnership agreement with BC Card, the largest payment operator in Korea, in early October. Also, the team announced the introduction of its cryptocurrency in Duty-Free and b2b partners in Hong Kong. Therefore, the coin rose in price. Nowadays there is a correction of LUNA. 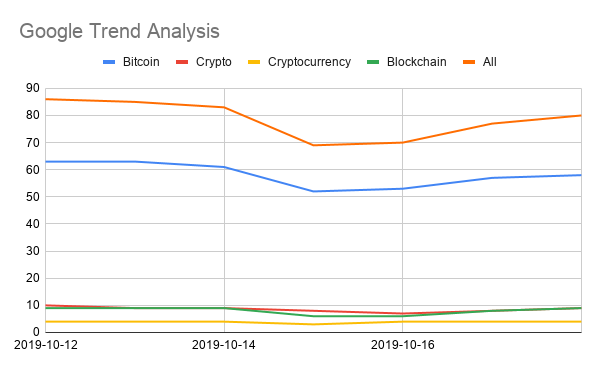 The total market capitalization has decreased by $10 billion and amounted to $216 billion. The trading volume has decreased significantly: from $68 to $54 billion.The market fell all week long, and no signs of growth were observed.

The price of bitcoin turned around and formed a downward channel, when it reached the level of $8,800, thus, it was affected the fall of other coins. Nevertheless, some of them showed positive dynamics. But important events, happened this week, and the news from large companies helped to break the downtrend of the market.

The dynamics of an increase in the growth rate has stopped, and the average fall value became bigger. Nevertheless, there is no need to talk about the ending of a small altseason, because the dominance of bitcoin has decreased to extremely low values, thus, probably, it will cause a great impact on altcoins, which have increased significantly this week.

We emphasize that the general background of weekly news was negative and provoked a decrease on the market. Bitcoin is still in the flat zone, although it fell below the level of $7,900.

Neironix does not forecast bitcoin. If you need fresh forecasts of the rate, consult a specialist.