Which coins have the lowest commissions?

One of the main advantages of cryptocurrencies, in addition to decentralization, is low fees. However, not all coins have the same сommission, so we decided to find out which cryptocurrencies are the most profitable when sending to each other. 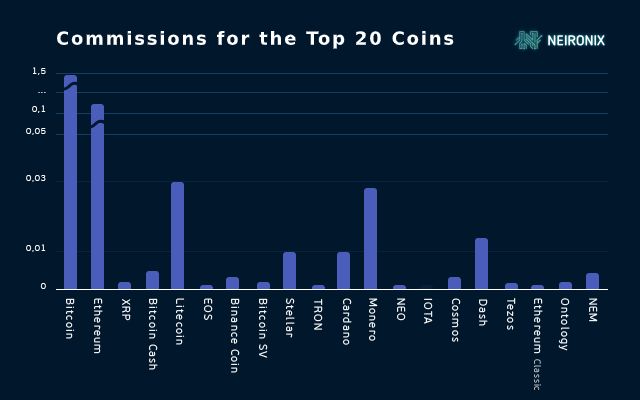 The highest commissions have bitcoin and ethereum. It is due to two problems: high popularity and small scalability. Both Bitcoin and Ethereum have a throughput of 7 to 20 transactions per second, which is not enough to process hundreds of thousands of transactions in these networks. Because of this, in order to speed up the recording of their transaction in the block, users increase the amount of сommission they are willing to pay.

Recall that in 2017, commissions for one transaction in Bitcoin reached up to $40 at the peak of popularity, and the network could not cope with so many departures. As a result, the time to find the block increased to 60 minutes, and in some cases the transfer of coins could take up to several days, although usually, this time is about 5-10 minutes for Bitcoin.

What cryptocurrencies have the lowest fees?

From the picture, you can see that these cryptos are EOS and IOTA. Each of the networks implies a lack of transaction fees. However, in EOS network, in order to receive the uncommissioned transactions, you must create a user`s account, which will take approximately 150 bytes of memory. It is for this memory that you will have to pay about $ 0.03. After that, you can conduct transactions without paying any commissions at all.

On the IOTA network, there is no commission for anything. It is due to the IoT technology, the essence of which is the transferring of data between devices through MIOTA coins. Each device is a node that supports the network, so there is no fee for this.

But why, then, when depositing and withdrawing cryptocurrencies on exchanges, do we pay completely different commissions?

The answer is quite simple — it is an additional source of income both for exchange and for all other cryptocurrency market participants that provide transfer services.

In our study, we relied on data obtained directly from blockchain networks on November 7, 2019. And these values are the average of all commissions in the network for one day.